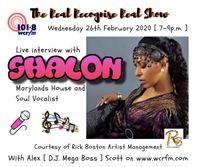 If you missed the On Air interview of Shalon’s musical highlights with Alex (D.J. Mega Boss) Scott on WCR FM 101.8 @wcrfm in the UK 🇬🇧 here is the first of many snippets of the interview!! This highlighted Shalon’s Manager @rickbostonmgmt as providing amazing talent all around. This interview also touched bases on a few of her songs starting off with the amazing “When you come home” produced by @gemstarpro and picked up by @amarrage_recordings , then it talked about the new album that Shalon has been working on produced by @anrewfelo @andrewfelo Then they took a dive into another song produced by @gemstarpro called “Take me by the hand “ and by the end of the interview they introduced Shalon’s latest release produced by @newjeruse called “RiverFall “